Na Fir Bhreige
Lochmaddy, Western Isles OS Map
Stone Row Canmore
Also known as The False Men
A couple of miles north-west of Loch nam Madah (Loch Maddy) is the hill of Blathaisbhal (Blashaval). A walk of a little under a mile from the road, up a gentle slope but through very peaty land, are the three standing stones of Na Fir Bhreige, or The False Men. There are at least two stories that go with these stones: one is that they were three men from Skye who were turned to stone by a witch because they deserted their wives; another is that they are the graves of three spies who were buried alive.

The stones are approximately in a straight line that runs from the peak of Blathaisbhal to the peak of Maari, almost 2 miles to the north-west. On the southern slopes of Maari are a couple of cairns, and in the col between Maari and Crògearraidh Mor is another standing stone.

Many thanks to Joanne Winters for information about the legends associated with this stone row. 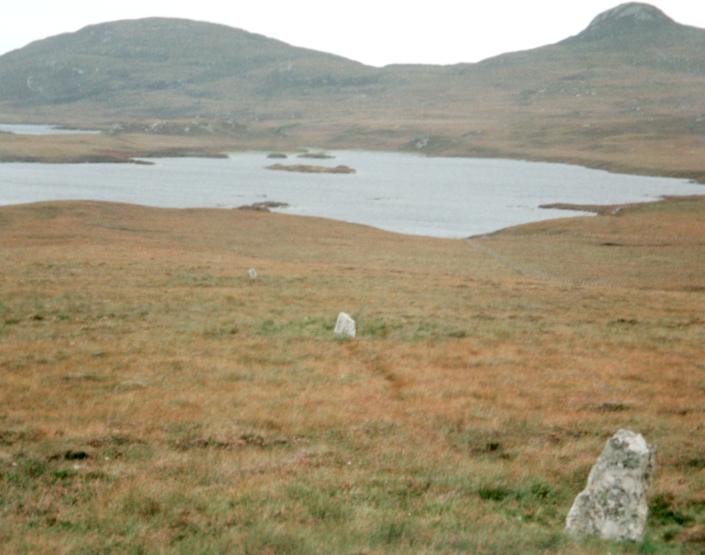 1/2 Na Fir Bhreige, looking from Blathaisbhal to Maari (on the left) and Cr&ograve;gearraidh Mor (on the right). 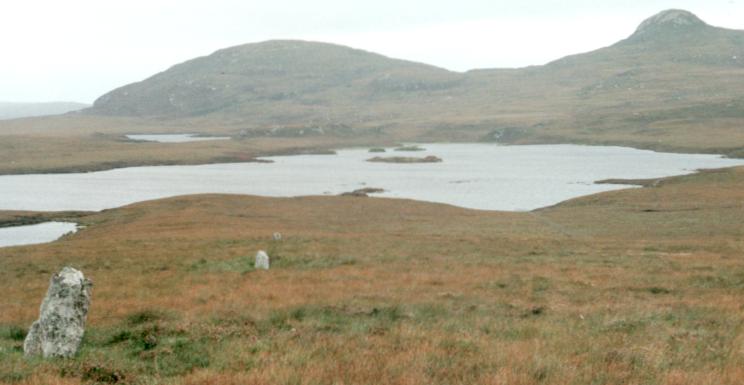 2/2 Na Fir Bhreige, looking from Blathaisbhal to Maari (on the left) and Cr&ograve;gearraidh Mor (on the right).
Previous Next