There are two Class I Pictish Symbol Stones (rough rocks, incised symbols) at Aberlemno. The best known is the fine Serpent Stone, so-called because of the serpent symbol at the top. The other is much less well known as the symbols have been largely eroded away.

This second Class I stone is very unclear. A large curving symbol (probably a crescent) above a smaller curving symbol may be faintly seen on the front face of the stone, but the symbols are in too poor a condition to be properly discerned. This stone is generally considered to be either an unfinished symbol stone or a more recent fake. 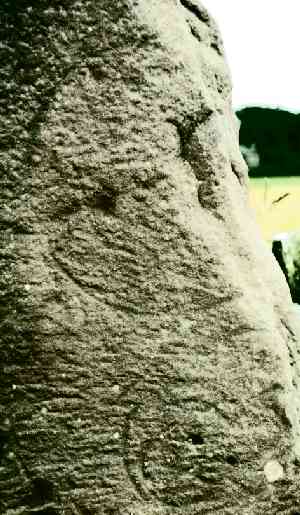 2/2 Detail of symbols.
Previous Next